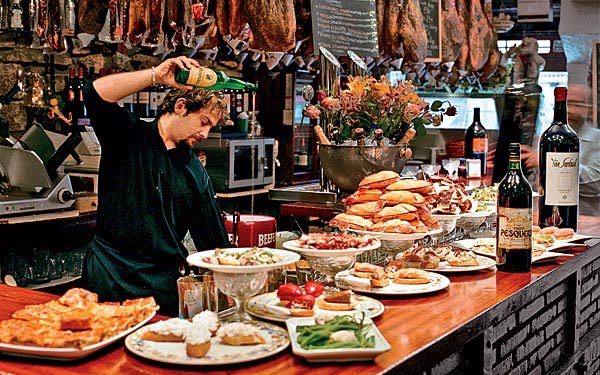 This is part II of the Pyntxos sprint.

In this sprint we will build a new project, Pyntxos.

Some context… EuroSciPy 2019 will be in September in Bilbao, Spain. Besides a great program of tutorials, talks, maintainers sessions and sprints, the conference will have social activities and networking.

What EuroSciPy will have different from other conferences, is that being in Bilbao, part of the networking will be done in their traditional pintxo routes. Pintxos are small portion of food, usually served on top of a small slice of break. There are streets full of pintxo restaurants, and what is usual is to eat a pintxo in one (with a small glass of wine or beer), socialize standing in the restaurant or the street for a while, and then go for the next, and keep repeating, following a route.

EuroPython 2015 and 2016 were hosted in Bilbao, and pintxo routes became very popular. This article gives some information about the importance of gastronomy in the Basque country.

In this sprint we will build a new open source Python project. This will allow participants to learn how to contribute to open source projects, and the different components of a project:

And at the same time, we will work and learn some open source libraries for data scraping, analysis, visualization, and dashboarding. Some of the proposed ones are:

Thanks to Deliveroo for hosting this event!

Deliveroo is a food delivery company founded in the UK. Their motto is ‘proper food, proper delivery’ and since then they have grown their offering to over 200 cities world wide. A big proportion of what they do is driven through great software and a fantastic data team. A lot of this is build on open source software and they are excited to give something back to the community. Check out their engineering blog: https://deliveroo.engineering/